Today the local HMGS-South group played a game of Talon. The Terran forces were tasked with defending the planet Eden from a Talon fleet. Six players controlled 13 ships (6 Terran, 7 Talon). 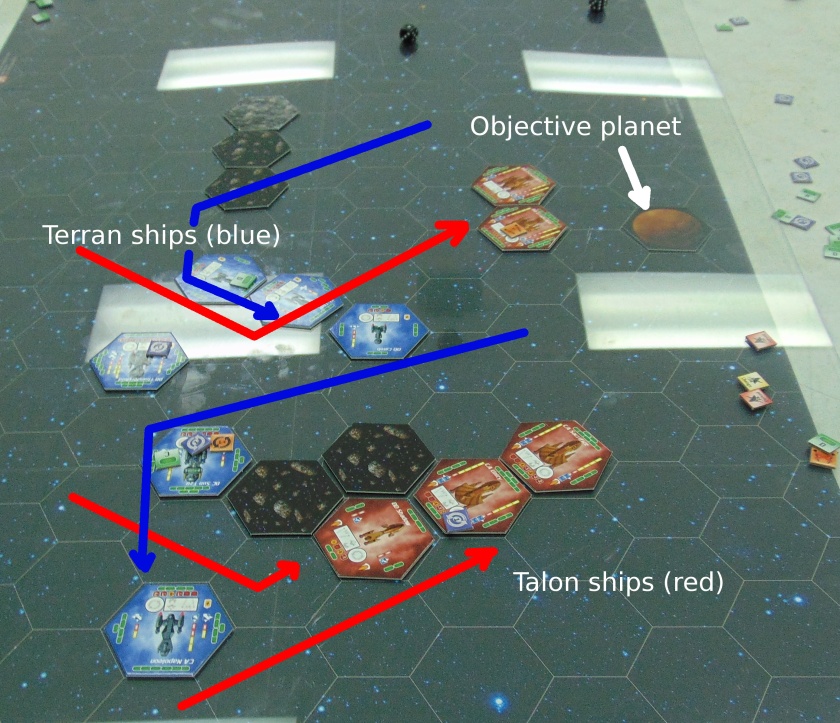 After 3.5 hours of play, the Talons had done more than half of the damage to Eden required for victory. Given the long reload times of the weapons we decided against trying to finish.

This weekend the local HMGS-South group played a Star Wars: X-Wing Miniatures game. The scenario was a rematch of the previous game, but with equal points instead of a canonical setup.

This weekend the local HMGS-South group played a Star Wars: X-Wing Miniatures game. The scenario was based on the Battle of Yavin.

Some time into the battle, Imperial officer Jude Edivon aboard the Death Star identified the threat of the Rebels’ attack strategy, and attempted to warn her superiors of the danger. However, Grand Moff Tarkin ignored the warning and refused to evacuate the station or launch any of the stations hundreds of fighters. Meanwhile, Darth Vader himself decided to lead his personal squadron of TIE Fighters to destroy the remaining Rebel fighters.

The game consisted of the main dogfight between elements of Red Squadron (7 X-wings), Gold Squadron (3 Y-wings) against Black Squadron’s 9 Tie Fighters. Meanwhile Han Solo was fighting with his conscience whether to intervene with the Millennium Falcon or continue on his way to payoff Jabba the Hut.

In the end, seven Tie Fighters and one X-wing were lost. The Rebel ships continued on toward their mission to bomb the Death Star. Darth Vader survived to return in Episodes V and VI.

These are Amarillo Design Bureau Starline 2500 series ‘Klingon E4 Light Frigates‘ cast in metal several years ago. At 36 mm in length, they are much larger than my old escorts. They will be used for a class intermediate in size between my F5s and D7s. The E4s and F5s will thus be reversed by size, but that avoids re-labeling all the old models.

Decals on new ships are from Mark’s Models and Toys.

These are Star Trek HeroClix I.K.S. Amar models (from the Tactics IV set), after painting and rebasing. Compared to the normal HeroClix Klingon battlecruisers, they have extra bits sticking out from the front of the wings and from the neck, as well as other differences in detail. In most Star Trek lore the Amar is the quintessential K’t’inga class. The card that came with these models mentions the Kelvin Timeline, so that may explain the differences.

Edit: A photo of an unpainted Amar is added.