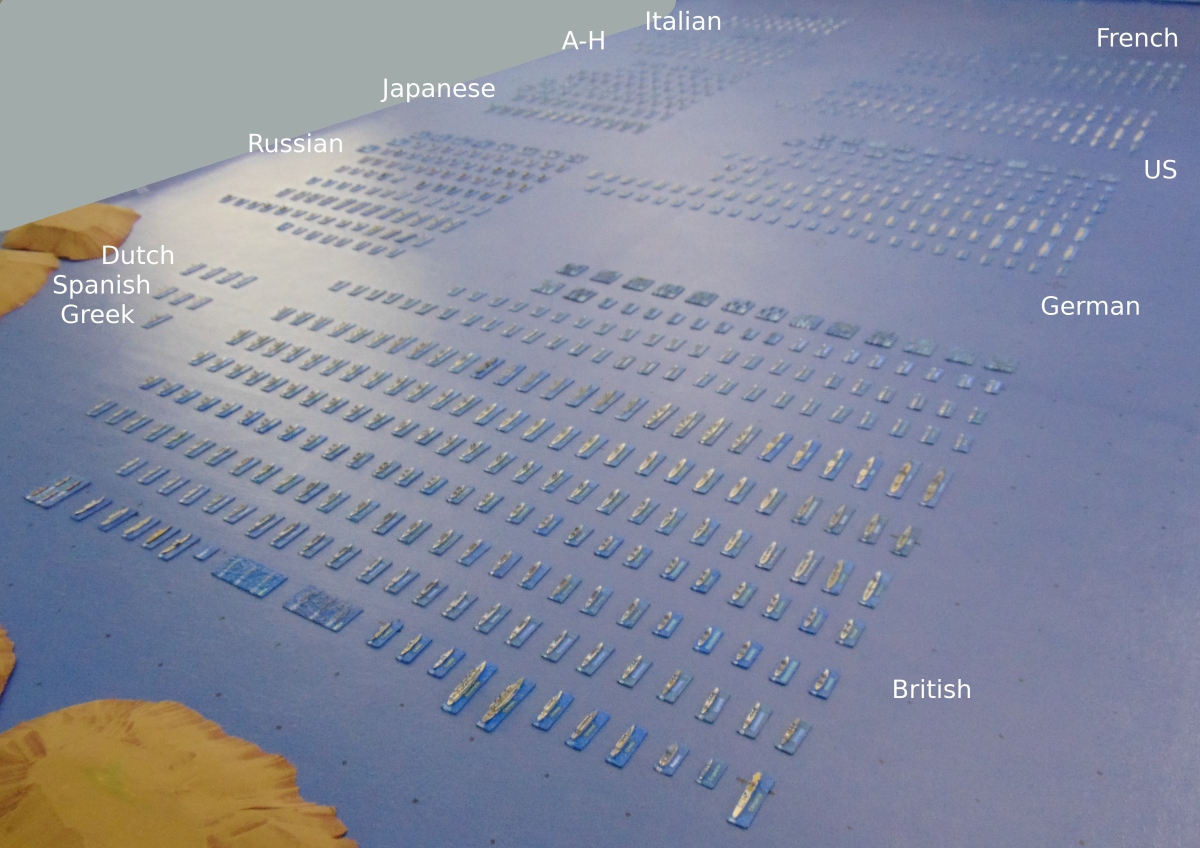 The computer program mentioned in some of the WW1 (or early 20th Century) naval blog posts is described herein. Page updated January 27, 2023.

Skagerrak is (or was) a computer simulation of WWI fleet actions in the North Sea. It was written for the TRS-80 and then for the Atari ST in the 1980s. The current code is a miniature support program. It uses the macro language of the LibreOffice Calc spreadsheet program, Version: 6.4.7.2.

Data is included for most British, German, US, French, Italian, Austro-Hungarian and Japanese ships in the 1904-1920 period.

A few notes on information used to develop code algorithms and scenarios are included here:

Ground scale is adjustable, but in order to play on the available table space, 500 yards per inch is currently used (1:18000 scale). WWI capital ship spacing in column was about 500 yards stem to stem, so the ship miniatures should be less than an inch long, including bases. 1/6000 scale models are used with bases about 4 mm longer than the ships, so there is some distortion for the longer ships. The code keeps accurate positions, so the distortion is mainly an aesthetic issue. The time scale is 5 min/turn. The code updates weapon fire, damage and position each minute.

For each turn, course, speed, formation and targets may be selected. Ships in formation attempt to conform to the movements of the lead ship in each unit. Destroyer and torpedo boat units can be set to take station on other ships when not conducting torpedo attacks. Divisions can be ordered to take station in relation to other division lead ships. Torpedo doctrine can be selected, e.g., speed/range settings, numbers to launch. Funnel smoke, smoke pots and smoke screens can be generated. Primary and secondary gun targeting and torpedo targeting can be automated. Tertiary gun and DD/TB gun targeting is always automated. Printed order forms are provided for local players and/or Google Sheet order forms for remote players.

Various text files are generated each turn with detailed and simplified results and plotting data. Output files for each side with limited information on sightings, damage, primary and secondary targets, positions, courses and speeds can be copied to Android tablets or to cloud drives for use by the players.

Set by nationality and date:

Torpedo and mine reliability.

Speed made good is a function of seastate, waterline length, acceleration (or deceleration) and turns.

Range vs visibility range.
Under fire; function of weight and accuracy of incoming fire.
Maneuvering.
Downwind.
Visibility per scenario.
Seastate (per ship class and weapon).
Time of flight.
Rapid fire (selected automatically based on hit probability) reduces or eliminates some of these adjustments.

Code Development: It is not intended to provide this code to others. The idiosyncrasies of the code environment and the user interface make it impractical to get it to function on another system. User support could not be provided. The code will probably continue to be modified for the foreseeable future.